A lone swordsman stands to duel a tyrant, silhouetted on a hill at sunset. A heavily armored woman holds a door against a tide of undead, defending the innocents behind her. With their last arrow, an archer shoots a devastating dragon out of the sky. Crackling with power, a mage discovers a spell to create rain during a drought; emanating warmth, a holy leader lays the spirits of the dead to rest.

Acts of heroism come in all shapes and sizes. Play your cards right, and you too can become a hero.

Aether is a card based Fantasy TTRPG focused on giving you a cinematic, character-centric story structure and helps you choose how much depth your character's abilities have and how they interact with the world around them.

You choose everything from your character's fate, to what they value most, to what they try to hide, and then your play group will collaboratively build a setting with as much or as little detail as you want to help the Narrator (GM) give all of you a place to start. The game is built to make your character choices matter, as each Goal your character has, each Value they stick to and each Omen that impacts the game becomes your way to earn Experience to grow stronger, or earn Limit Breaks to succeed in dire moments.

The game also includes a full suite of tools to guide new Narrators (Game Runners) get used to the flow of gameplay, planning encounters and building their own monsters to use (complete with random generators).

A deck of 52 playing cards, the files, and a way to keep notes.

So why crowdfund? Well for two years Aether has been a one person project, and I (Eldritch Crow) have taken it as far as I can on my own. So, the crowdfunding campaign is to raise the funds for me to hire a team of sensitivity readers, an editor, a layout artist and an illustrator to take Aether to the next level, as well as to fund a physical print run of the game. You'll find a rough breakdown of the budget below for the sake of transparency and so that you know where the money is going before the campaign even begins. Check back here for devlogs with regards to the platform that Aether will be crowdfunding through!

Note that this is all subject to change once I decide on an alternate platform to Kickstarter. With their stance on NFTs and worrying exploration of the technology behind it, I simply don't trust their platform to fund Aether ethically. Likely alternatives include Gamefound and Itchfunding through this page, though some research needs to be done for etiher. The goal at current is $31 000 CAD for the initial funding goal. Note that the budget breakdown below doesn't exactly add up, and that's because I'll be paying the team in USD so I am increasing and rounding up heavily for the exchange rate, fees and taxes etc. This goal might rise before the campaign begins.

And then increase the above total by 30% roughly to account for fees and conversion.

The team I have lined up includes a group of fantastic creators and friends:

There are only two stretch goals. At $33 000, Dee has agreed to design an entirely web-based version of the core rules to be viewable in browsers etc. This will make the core rules more accessible for screen readers and give you another avenue to access them.

Any money made past the first stretch goal is to be divided evenly among the team as bonuses. This includes any money left over after the project is completed, as my personal goal is to pay the team more money without adding additional work or stress.

What You're Paying For

As a backer, you're paying to get Aether fully illustrated and laid out professionally. You're helping level the game up and (hopefully) create a print version of the game. David Joyce is currently on deck to be the illustrator for the game, and he has done a wonderful sample piece to give you an idea of the monochromatic colour scheme we want to go with, giving the game an almost Final Fantasy concept art vibe as you can see below: 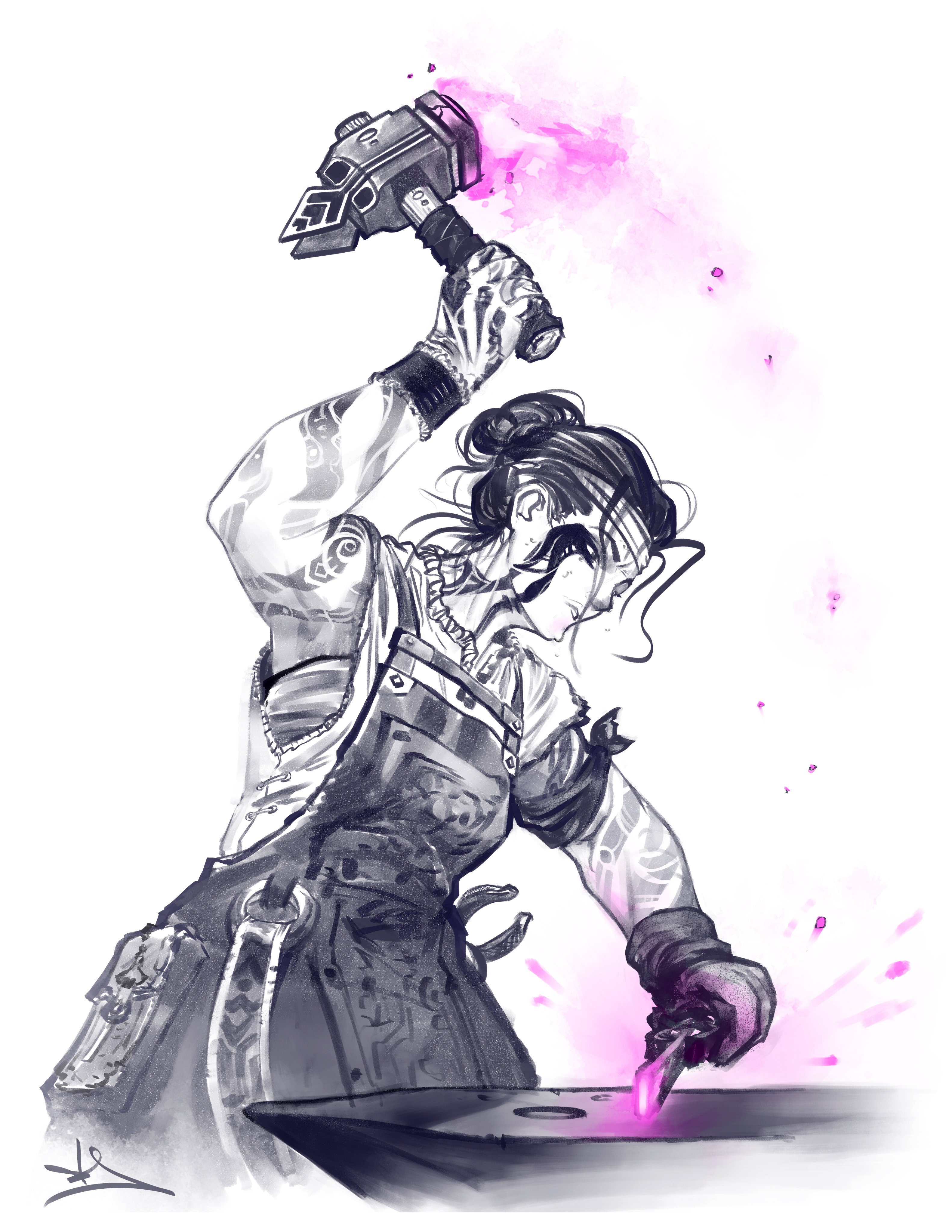 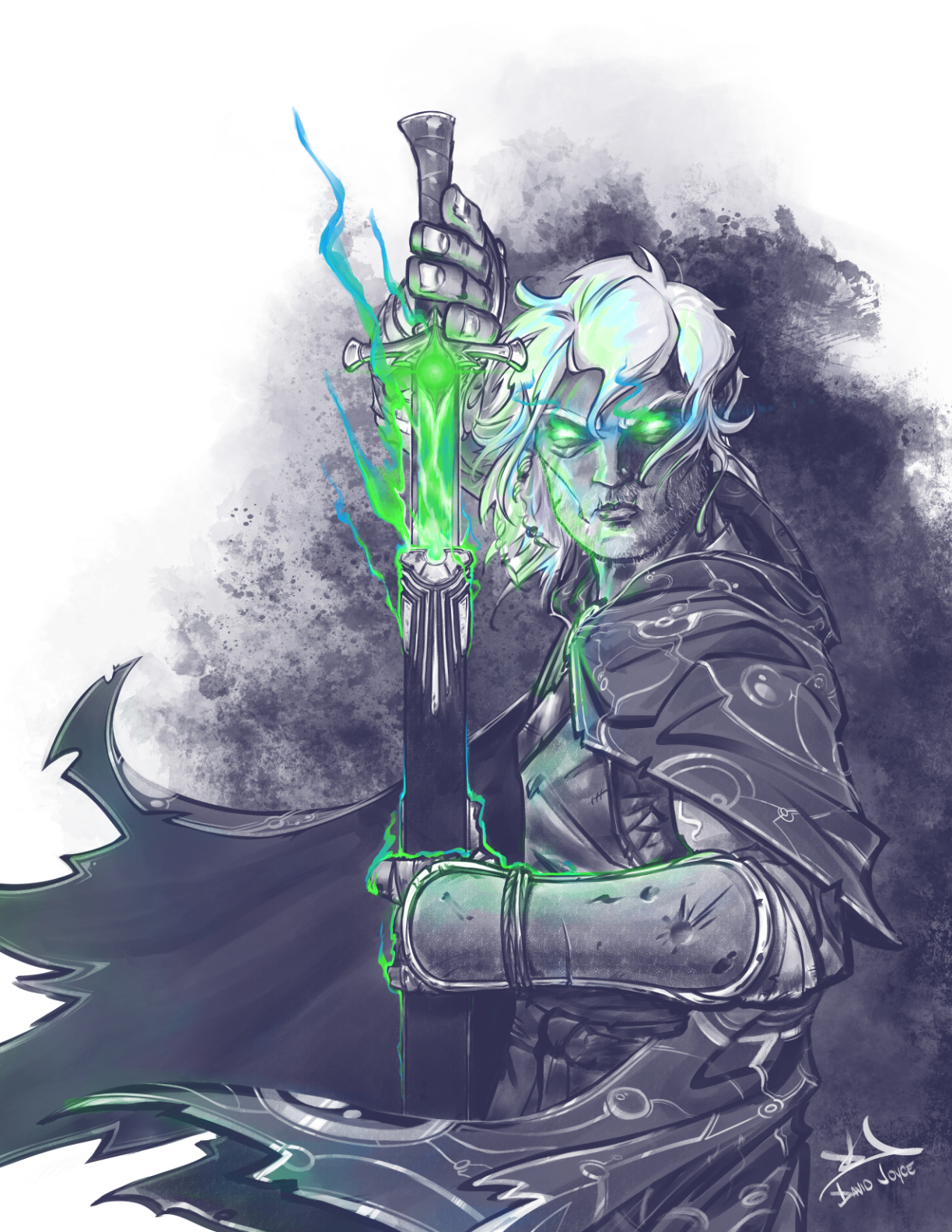 I'm so excited for you all to get to see Aether with a full team behind it. Keep an eye on this page for more information as time goes by!

In order to download this game you must purchase it at or above the minimum price of $17.50 USD. You will get access to the following files:

Support this game at or above a special price point to receive something exclusive.

Every purchase of Aether goes towards giving anyone who wants to play the game but maybe can't afford it the chance to try it out. Community copies are free, and each purchase adds 1 to the pool so it's like you're buying a copy for a friend!

I also have a Ko-Fi goal set: every $100 that's donated will add 5 copies to the pool, so if you take a copy and feel inclined to give back, but the price is a bit high, you can still contribute and keep things going. If you want to donate you can do so here: https://ko-fi.com/eldritchcrow. If you really want to play the game and there are no community copies available, DM me on Twitter or email me at eldritchcrowgaming@gmail.com and I'll get you one.

Hey, uh, you should probably be aware that Silver Gryphon Games already has an RPG called Aether that’s been in print since the early 2000s. You might want to change the name.

Thanks for the concern, but I wouldn't have been selling the game for over a year or have a Kickstarter running if there was a risk of a copyright issue. That was some of the first research I did before release :)

One of the most innovative game systems I've read. Easy to learn, very flexible and fun. The card system adds a layer of resource management and luck mitigation I love. Rolling dices? As Tokyo N@va RPG says "professionals don't trust in luck". LUMEN+card system it's a winner combination for me.

That card system gets me intrigued. Seems adds a layer of resource management to the game that my tabletop eurogame soul could love. Also seems the game could be very soloable. Purchasing the game in itch.io will provide access to the final version of the game? Or have to wait to september crowfunding to get the full version?

You get the full version of the game if you buy it here! And once the crowdfunding is complete the files here will be updated so you'll have access to the crowdfunded version.

Also Aetherpedia Volume 1 has additional solo play rules for the game if that's what you're interested in!!

Nice. Also... Can we get an sneak peek of how magic system/spells work? For me it's the most important part of a fantasy rpg.

There are no spells, instead since it's all skills based, you have Magic Skills as a category to choose from during character creation and when you level up (things like pyromancy, blood magic, shadow magic etc). So those skills work just like any other skill check in the system; you decide what skill you're using and how you're using it, then make a check for degree of success.

There are also player Abilities that function as basically shortcuts that don't require skill checks, and you get to make your own for your character. So if you want to create shortcut spells that just work, you can do that in exchange for spending a resource. I made the magic system and abilities specifically around the idea of "i have a category of magic i can use, but I decide how I use it," so if you want flexibility in your decisions, you'll enjoy the magic system. 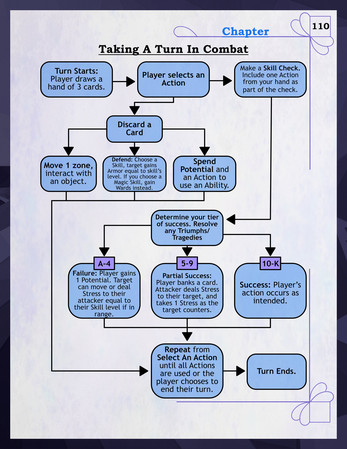 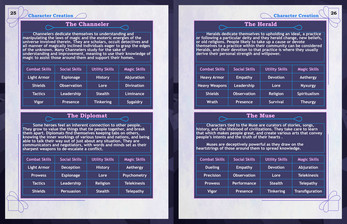